We now have a much clearer picture of what to expect from the next patch for Teamfight Tactics that officially closes the game’s Beta and usher’s in The Rise of the Elements, thanks to a post from Riot Mort, a lead designer at Teamfight Tactics:

There’s no official date set for the release of Patch 9.22 Rise of the Elements, but for players with access to the Public Beta Environment, RoE has been available since October 22.

From everything we’ve seen and learned so far, throw your favorite meta’s in the trash because RoE is bringing so many new characters, “origins,” and game mechanics that TFT is about to become almost unrecognizable. 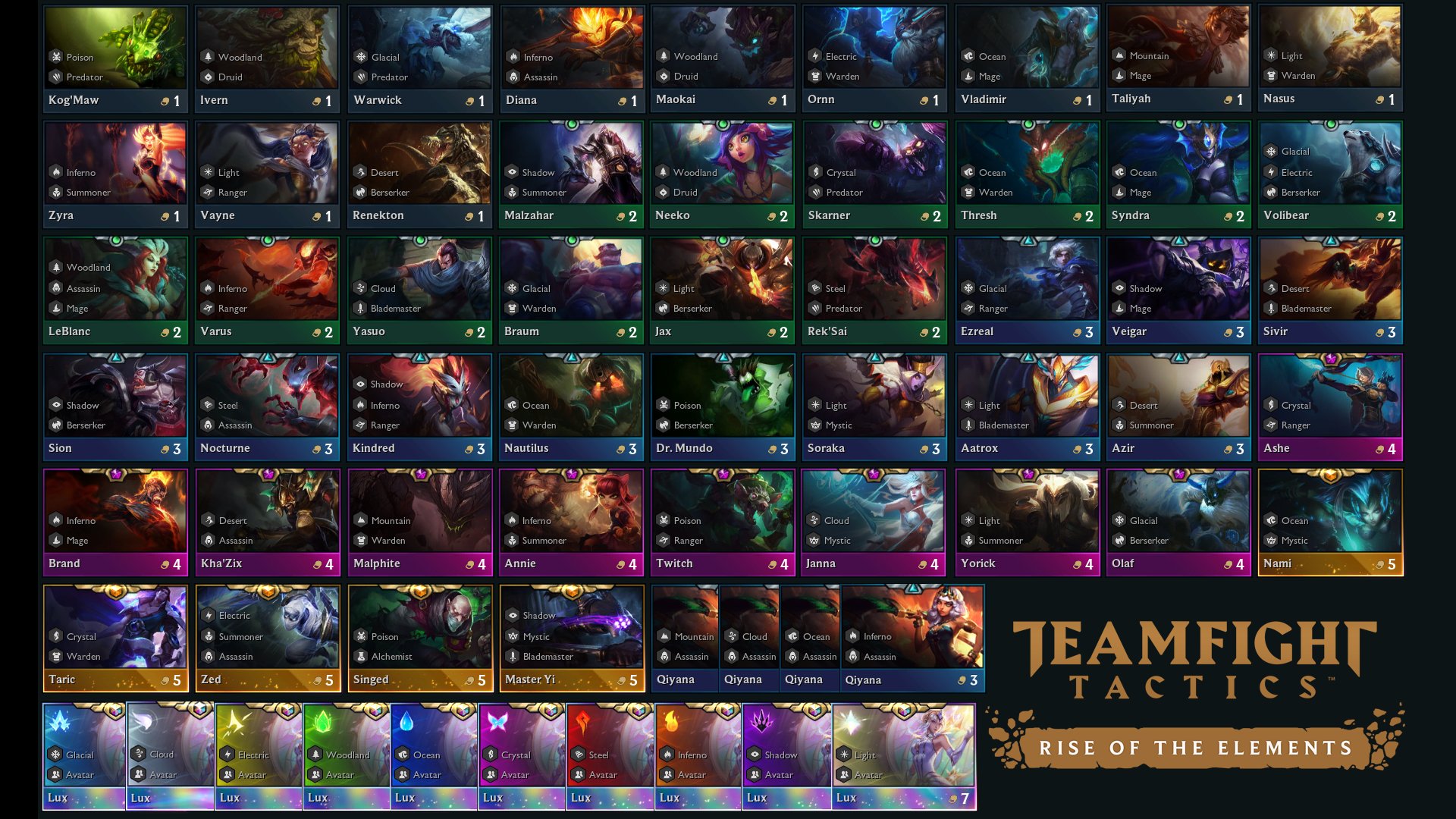 This season champion’s origins have been replaced by 13 elements. The new elements function under the same rules an origin – deploy multiple champions with the same element to unlock trait bonuses – but, except for Glacial Champions, all of the bonuses are brand new.

Crystal: Grants champions a limit to the amount of damage they can take from a single attack or ability hit.

Glacial: Grants attacks a chance to stun their target, increasing with more Glacials.

Steel: Briefly become immune to damage when they drop below 50% health.

Mountain: Grants a massive shield to a random ally at the start of combat.

Poison: Damaging attacks and abilities to increase the mana costs of their targets’ abilities.

Woodland: Randomly create a clone of a woodland champion (including items) at the start of combat. 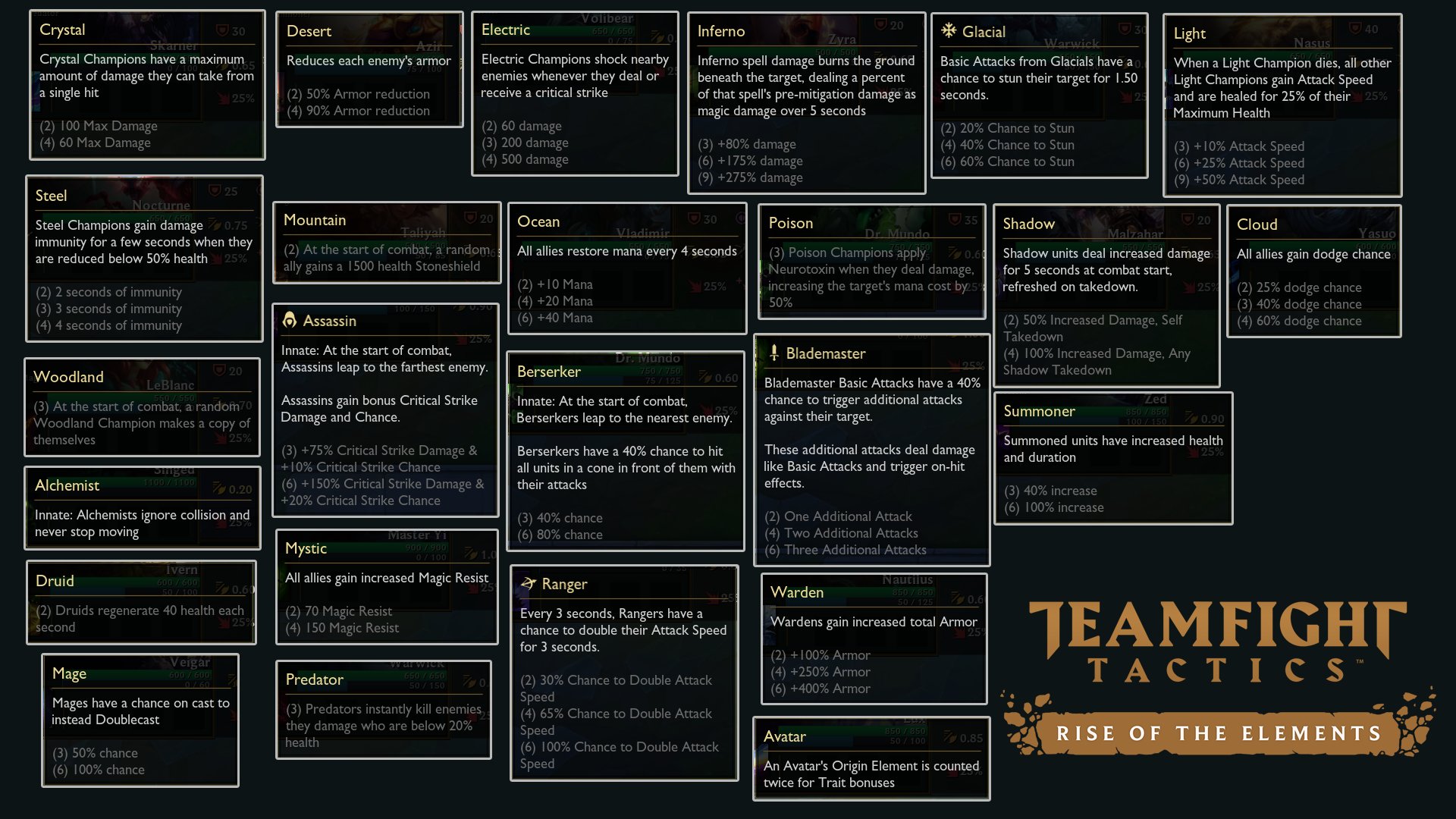 Patch 9.22 also brings with it nine new classes alongside Blademaster, Ranger, and Assassin which remain unchanged.

Alchemist: Alchemists can move through other units and never stop moving.

Avatar: An Avatar’s element is counted twice for trait bonuses.

Berserker: Deploying multiple Berserkers grants their attacks a chance to deal damage in a cone behind the target. The chance increases with more Berserkers.

Summoner: Deploying multiple Summoners increases the health and duration of their spawned allies, increasing with more Summoners. Summoners’ pets benefit from Element and Class bonuses, but don’t count as additional units toward activating higher levels of those bonuses.

Mage: Deploying multiple Mages grants them a chance after casting an ability to cast it again. This chance increases with more mages. 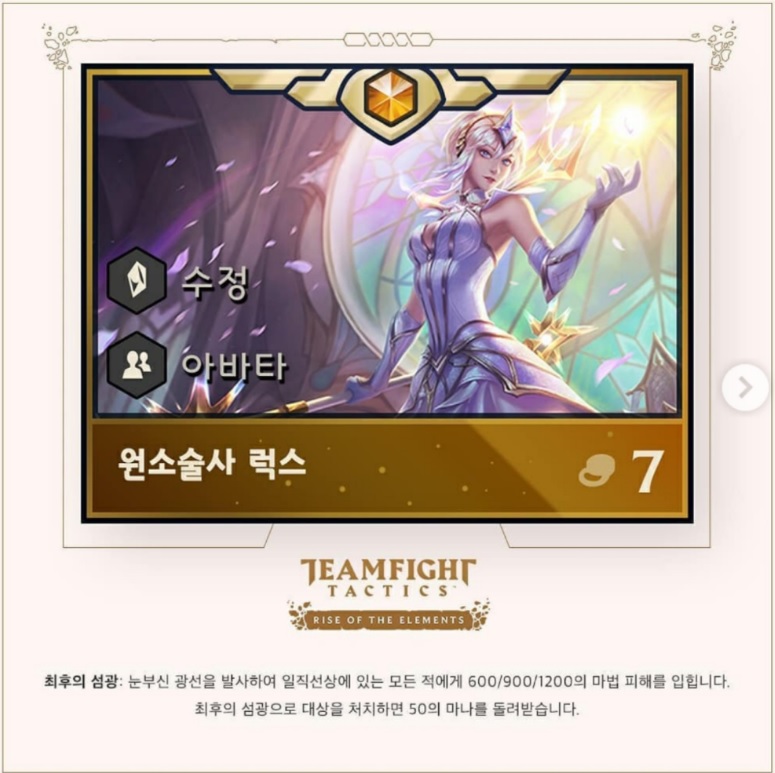 Let there be Lux

One of the most interesting additions coming in the new patch is the introduction of TFT’s first 7-cost champion, Lux.

Each game of TFT will contain 10 Lux champions, with each copy representing a different one of the 10 elements. Once a player purchases a copy with a specific element, all other copies will appear in your shop as the same element.

Since Lux is the only Avatar class character, meaning Lux counts twice towards elemental bonuses, whichever Lux you do choose can be the all-important difference between six and nine unit bonuses.

Each Rise of the Elements game will randomly feature one element, which can be tracked in the center of the carousel:

At the beginning of the game, one random hex will be imbued with the element of the game on each player’s board, buffing the champion that starts combat on top of it each round. When the game reaches stage 3-1, a second is created.

Quiyana’s element and the Elemental Drake encounter will also be determined by the game’s specific element. 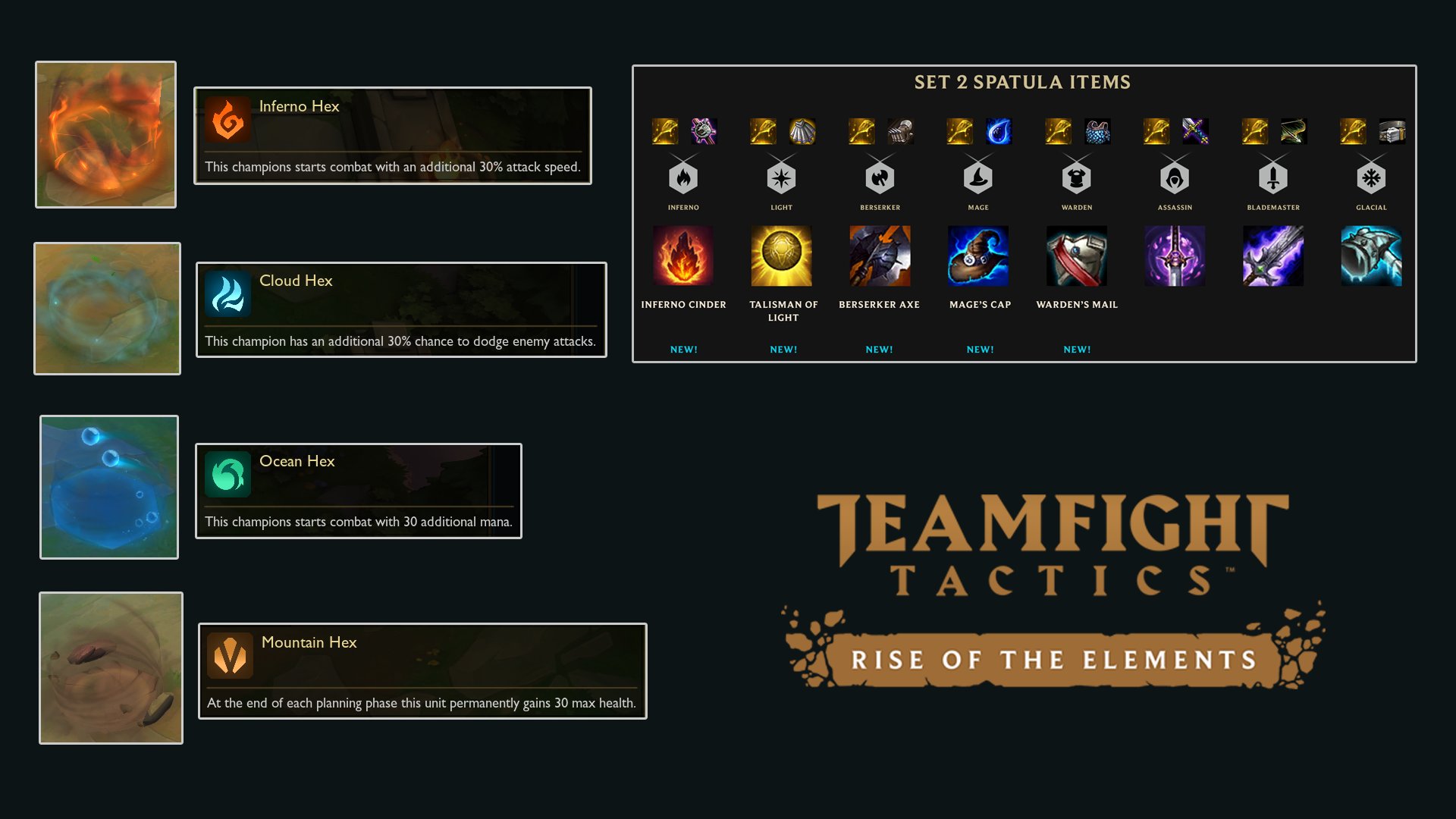 No Ranked for You

Finally, if you were hoping to test your skills with the new sets in ranked matches, Patch 9.22 has bad news for you. Once RoE launches, Ranked will be down until at least the next patch is released.

While this may not be welcome news for everyone, Riot says it made the decision to ensure there are no major bugs or balance issues players could exploit for easy wins and a one-way ticket to finally break out of Gold II.

Fortunately, if everything works smoothly, TFT ranked play will likely return in a month in Patch 9.23. This should give the community plenty of time to figure out the meta and prepare for the ranked grind.

League of Legends: Wild Rift coming to mobile and console by end of 2020

Teamfight Tactics is coming to mobile devices in 2020